[Albion] Happy Christmas to all on NSC

A merry Christmas indeed to all. I had planned to say "to most", but i suppose even those who sound a bit fiendish might deserve a smidgeon of joy on such a day.
Eat vastly and without regret, and relish the company of those around you. I'm on my own today, but hopefully for the last time. The missus is in Spain already with Meade Jr, who at 2 doesn't fully get Christmas yet. The missus had the chance to be with her family for longer, so i said to go. I'll be out with them in a few days, with 2 Albion performances behind me, but i don't like waking here in London without wee Meade and any excitement he might have tearing wrapping paper apart like a cat.
Off for a 90 minute cycle shortly, on emptier streets than usual, and then back home to start the eating.

Have a fantastic day everyone. And if it gets stressful, remember how lucky we all are compared to most. Apart from anything else, we have the Albion!

Festive greetings to all those poor sods working today.
I'll raise a cup of tea to you, whilst I'm there too

Bissouma steals the show for me!

Merry Christmas everyone, may your brussels be crunchy and your sage and onion stuffing divine...

Hugo Rune said:
Bissouma steals the show for me!
Click to expand...

How can you not love the guy?

Sent from my SM-G975F using Tapatalk

Merry Christmas everyone. Everyone.

Exuberant Commercialism to you all

I spent 3 hours yesterday evening prepping the food, so we are having the most unusually chilled start today. Nice cup of coffee, opening a few pressies, the nipper cheery, the missus with No Jobs to do, and we are looking forward to my sone and my old pal Bob arriving later for dinner.

So, to the music. Obviously as a music obsessed family there will be no ITV soapy bollocks for us, and nothing dark and dangerous.

We have kicked off with a bit of electric Youth: 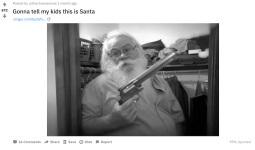 Merry Christmas one and all, although my Christmas evening viewing is now a dilemma as I see the Magic Flute from Glyndebourne clashes with Cary On Up The Khyber..

Back on the rollercoaster

seagullwedgee said:
Could you perhaps try to be a little more diverse, and inclusive. Not every religion celebrates Christmas, and there are of course the agnostics and atheists too. Also, not everyone wants to be ‘happy’ at this time of year either. Also not every society has a new year when we do, so best not mention that. Maybe just go with ‘compliments of this festive season’ or something more bland and PC and less divisive and confrontational?
Click to expand...

Merry Christmas everyone and a Happy New Year. If you don’t celebrate it maybe you could just leave those that do to enjoy it without expecting us to dumb it down.

FWIW I detest the long build up and hype that surrounds it but once it arrives I bloody love it and so do my family and we celebrate it big time. The kids and grandkids especially, no bugger is gonna spoil that with negativity and PC ness
Last edited: Dec 25, 2019

Merry Christmas to all of you on NSC, especially the haters.

Have a wonderful Christmas and a prosperous New Year.

jakarta said:
Merry Christmas one and all, although my Christmas evening viewing is now a dilemma as I see the Magic Flute from Glyndebourne clashes with Cary On Up The Khyber..
Click to expand...

If you want the best of both worlds, PM [MENTION=31]El Presidente[/MENTION] and he may be able to lend you his specialist DVD "The Magic Flute up the Khyber."

I hope you all have a lovely day .

Mr Putdown said:
Merry Christmas to all of you on NSC, especially the haters.
Click to expand...

What's so special about Luton?

Do you still remember where he lives