Kinky Gerbils said:
There’s nothing really coming through in the U21s either.
Click to expand...

Centre backs usually get their breakthrough a few years after U21 level so its probably too early to say much about the current crop tbh. Theres not a lot of starting PL CBs aged 25 or less in general, regardless of nationality.

No doubt he'll have a stormer against us on Saturday ....

I have to disagree, he doesn't just stand off spectating he does a lot of pointing, if you watch him he is constantly pointing at the attacking player usually just after they have passed him..

Kinky Gerbils said:
He’s not the quickest, playing with a high line could be an issue.

He should be in/around the squad for sure, however none of the England CBs are at the highest level, not sure that’s controversial thing to say.
Click to expand...

Maybe pace is the thing as our only quick player to start last night was a CB - well, an out of position right back.

No doubt he'll have a stormer against us on Saturday ....
Click to expand...

Another not very good CB who has a bit of pace, so get favoured for England. I’d rather just have the best two defenders .... Maguire and (unpopular on here probably) Tarkowski, both specialists.

Villa’s forwards/game changers of Grealish, Barkley, McGinn and Watkins, have taken the spotlight away from the incompetence of Mings. I watch a fair amount of EPL football and even this season his name always crops up in goals against analysis with “went to sleep”, “ball watching”, “failing to spot his man”.
S

4-3-3 is the way forward. High line, press at a high tempo and accept that were going to concede goals. Personally I go with Gomez when fit and Walker who despite not being a centre half has the recovery speed we would need to press high up the pitch. Both are decent with the ball. White could potentially be an option but this season has shown he's not ready for that step up yet. Our problem generally is not in the air its in the transition from giving away possession in bad areas or on the counter through pace and superior movement. One holding midfielder, one box2box one and someone capable of playing a killer ball. Get the ball into any of our front options in good areas and they can hurt you.

We might not win tournaments but we give ourselves the best chance of doing something and at least we won't stink the place out.
B

S'hampton Seagull said:
We did beat them at home you know! With these line ups I think we have a chance of getting a win tonight.

Sent from my SM-G973F using Tapatalk
Click to expand...

Can anyone sit me down and explain what this "Nations League" is all about and how it differs from the Euros ?
S

Haha, not my finest prediction!

Sent from my SM-G973F using Tapatalk

BluesRockDJ said:
Can anyone sit me down and explain what this "Nations League" is all about and how it differs from the Euros ?
Click to expand...

It’s replaced most friendlies, to give meaning to all internationals and to pit not dissimilar standard nations against each other. With the incentive of promotion between leagues and a trophy for the ultimate winner. At the same it’s used for qualification to European Championships.

Not a surprise at all. The only English player who would start in a combined 11 is TAA and he wasn't playing. Kane would make the bench.
U

Kinky Gerbils said:
There’s nothing really coming through in the U21s either.
Click to expand...

There’s this Ben White chap I hear is quite good. Being played out of position for his club though.

There is some irony in the weaknesses of the England team being the same as the Brighton team. Psuedo-intellectual managers attempting to outwit opponents and not being able to do so.

Always nervous about a poor Germany. It normally means they will win one of the next two tournaments.
F

Brighton Lines said:
Always nervous about a poor Germany. It normally means they will win one of the next two tournaments.
Click to expand...

No not with Low still in charge they won’t. They needed to get rid a while ago but have stayed too loyal.

The winner of the Euros will be one of Spain, France or Portugal.

Their biggest ever defeat (competitive games). 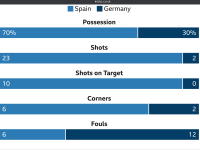