Questions said:
Anyway first and worst is The Who at The Centre in about 1980/81
Click to expand... 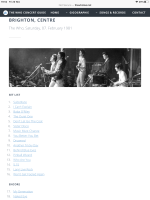 That was one of my favourite gigs!!
I wasn’t really a fan of The Who back then but I was given a free ticket, liked them ever since.

I was DJ guest at Cream Liverpool New Year’s Eve 1999, that was amazing but MJ at Aintree was literally insane.

Makes me wonder whether anyone on here has seen DVDA live. The two lads who make Southpark.
M

Harry Wilson's tackle said:
First: Genesis at the Dome, Foxtrot tour. 70p to get in. I think String Driven Thing were support so they are the actual first band I saw.

Worst: No too many but I'll go for the second time I saw Bryan Adams at Wembley. The first time I saw Bryan Adams I had been dragged along by my girlfriend and, unusually for me, not wanting to upset her again, said it was quite good. Actually I loathed it. The worst type of wet, fist-pumping pop-rock nonsense (and I love a bit of pop, and a bit of rock, even a bit of arena rock, but....) imaginable. The second time I went I could barely disguise my disappointment and, during the gig, my absolute agony as a big fat bloke in front of me attempted to clap along, but without any semblance of rhi-hi-hythm, to the dim dirge on stage

Best: Hard to call. I won't bore everyone with my usual overkill and list 20, so I will invent two sections (below) and say the best was probably the fist time I saw Wire at the Nashville rooms in Fulham in about 78 when they released Pink Flag. It was absolute shiver down the spine music, with the occasional 20 second interludes going bat shit mental to tracks like Mr Suit. Because I knew every song and every word I knew exactly when to stop dancing and felt super cool as a consequence

Last: The delicious Boy Harsher at the Scala earliy in the year.

Most Iconic: The original Human League, also at The Nashville, with Brian Eno sitting alone by the door, and a brief visit from one David Bowie (plus 2 minders) who stood next to me, and exchanged a few words

I can't top my ex wife's most iconic - the Stones at Altamont. Or my mate Roy's who saw the original Pink Floyd at the UFO more than once, and my old pal Bob's who saw the Beatles play the Cavern more than 20 times, and Little Richard play the Tower Ballroom, New Brighton.

I once stood at the next (but one) urinal to Jonathan Richman at Eric’s in Liverpool. The Modern Lovers weren’t there, nor any Egyptians.

My wife, from Liverpool didn't ever see the Beatles but constantly reminds me that she saw Hendrix, as support for somebody else. She has also sat in the front seat of a helicopter and I haven't.
Last edited: Nov 20, 2020

First - Soundgarden
Worst- Rage against the machine. Just recited anti war poetry until we all left.
Can’t be topped- Rollins Band, Illumination tour ‘96 (I think). The Flaming Lips and Giant Sand have both come close but not quite topped that one.

As I read this they are on TOTP

bn9 bha said:
As I read this they are on TOTP

Funnily enough only got The inspirals tickets off a person on here ,as Reading v Brighton was moved to a Friday night . My i bounced myself all over Brixton Academy that night .
B

First - The Who Worthing Assembly hall 1974


Sent from my iPhone using Tapatalk

First gig: Alice Cooper at Wembley arena, December 1989. Birthday present from my dad's mate.
Worst gig: Jason Donovan at Wembley arena, 1992 I believe. Birthday "present" from my mum's old next door neighbour who was obsessed with Donovan and clearly had nobody to go with. Awful.
Best gig: Linkin Park, O2 arena, 2008. Unbelievable gig. Chester Bennington was one of the greatest voices and their music still holds many memories for me. So glad I got to see them live.

I’ll add a very honourable mention to LCD Soundsystem at Concorde 2. Would have been in the 00’s. Tremendous night.
H

On The Edge of Town

Worst: After the past year, it is difficult to think of any live music as bad

First- Madness at Hammersmith Palais around 1980. This was an Under 18s only event. Cost a quid to get in and started, I kid you not, at 11.30 a.m
Worst- De Le Soul at Top Rank and numerous Fall gigs. Naturally.
Best- British Sea Power at High Rocks. ( The first time) and Grinderman at The King Alfred.
T

Worst, Probably the Nolan Sisters again in Brighton. To please my girlfriend who went on to be wife. Bucks Fizz (Crawley) and Michael Buble (O2) falls in the same category.

FamilyGuy said:
First: The Who at Dunstable Civic Hall (1969?) possibly just before or just after they were at Woodstock

Best: Joan Baez anywhere - but especially at Crawley (I know, I know!) a few years ago, when she sang and dedicated "Forever Young" to me and my wife, and our two friends, as it was our anniversary (I did write and ask her). Especially poignant as our two friends have both died in the intervening years.
Special mention to The Saw Doctors, whose live gigs never fail to please.
Click to expand...