[News] The ‘Coolest’ person you ever met in the flesh?

During this heatwave a bit of light relief.

In person, who’s the ultimate definition of ‘cool’ you’ve met in your life?

I will kick off with a funeral in Arundel in 1998, which was attended by the late Peter O’Toole.

He’d previously turned up at the Church a week early by mistake and merely said to the Lady Churchwarden “No worries young lady, I’ve never been to Arundel so I will go for a stroll, and see you in a weeks time”

At the service by then 66, and clearly having knocked the a*** out of life, he looked immaculate, his suit clearly from Saville Row, at the end of the service once out of the Church he lit up a Gauloise Cigarette with an old fashioned cigarette holder, there must have been 300 people there but he just stuck out.

The family, thespians themselves, introduced me to him the graveside and I got to shake his hand.

A real Gentleman and IMHO the definition of cool. 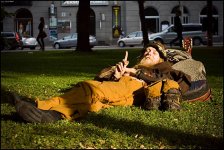 He's a Swede but wandering the planet all year every year. Any kind of bohemian or grassroots event and he'll be there - cooking, cleaning, repairing things, playing music, taking care of people who are too drunk, always super mega friendly (without being full of himself, which is quite common among these kinds of people) and has this almost eerie ability of showing up anywhere at any time... I've randomly met him three times abroad. Sure, he is like 2 meters tall, smokes a long arse pipe and is highly visible but still. Great guy.

Mr C (of The Shaman for the youngsters), beers after a DJ contest.

That afternoon in the VIP suite at Heathrow when I met Usain Bolt, Brad Pitt and the Dalai Lama within an hour.

Lost to the vultures 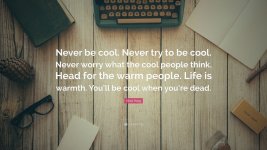 Sussex by the Sea

Sussex, by the sea

Gordon Murray, unbelievably laid back cool dude, and a genius to boot.

He put up with my hero worship for a few minutes!

And then everyone else who I was with!

Apart from my Mrs.
It has to be Tony Bloom.

I've never met him, but Scott Parker was wearing a collared shirt buttoned up, a tie and a cardigan on the touchline yesterday.

Titanic said:
I've never met him, but Scott Parker was wearing a collared shirt buttoned up, a tie and a cardigan on the touchline yesterday.
Click to expand...

Is that not insanity?

Staring at the rude boys