Now it seems to have been narrowed down to a few realistic options, who are you hoping for? Poll to follow.

WhingForPresident said:
Now it seems to have been narrowed down to a few realistic options, who are you hoping for? Poll to follow.
Click to expand...

why even post it, without a poll, is there a fire ?

Psychobilly freakout said:
why even post it, without a poll, is there a fire ?
Click to expand...

You can only write up the poll options once the post is posted. A great "feature" of vBullitin.
H

I voted De Zerbi, but Hainse and Knutsen still look like excellent fits for us. Any of those three and I'd be happy.

Everyone drifting apart from Haise 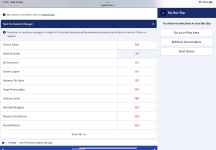 Any of the 6 named would be ok. Having advocated for Cooper in the past I'd actually have him 6th out of those in the list. Sticking with Team Knutsen for now though as first choice.
F

I voted De Zerbi purely because I know more about him and have watched his teams more than the others (Cooper aside). Would be pleased with Knutsen, Haile or Svensson though from what I do know and have read up on them. Less keen on Cooper and Postecoglou

Its a better list than the one with Jones, Martin, Dyche

I'm surprised that Cooper remains so high in the betting and they've got him down as twice as likely as De Zerbi. Have there actually been any indications from anywhere that Cooper is even in the running or interested?

This must just be market movement from people chucking a tenner on, I don't think the bookies have a clue.

Would take anyone on that least apart from Cooper.

I really don't know anything about any of them... (Cooper aside, and I'm not sure about the cut of his jib, the Celtic dude a little, but he's unlikely to come I suspect) I knew a substantive amount about Graham Potter prior to his arrival and I still wasn't sold... which, obviously, was a misjudgement.

As such, I'm in a terrible place to make any kind of call, and thus I won't be doing so... nor will I be making any ill-informed pre-judgements about the one who is successful... I'll judge them purely on their results with us (which we'll all do anyway, so all of this "what they've done wherever" is a bit pointless - sigh), with anywhere from survival upwards acceptable in my eyes - especially as it's looking likely they're going to be very, very new to English football.

Sergio Conceiçao of Porto has now appeared on the SkyBet list at 16s?!

I just hope the next manager can be appointed in the next week or so.
Lots to get on with, could do with this being concluded in a timely manner.

Doonhamer7 said:
I expect most NSC hadn’t heard of at least 4 or 5 of these blokes until 10 days ago
Click to expand...

WhingForPresident said:
Sergio Conceiçao of Porto has now appeared on the SkyBet list at 16s?!
Click to expand...

I suspect we've told him that the Amex is basically a toddler version of the Estadio do Dragao! He'll barely notice a difference.

I'm still holding out for Gollardo(Yes, I know he's not coming to us)